The branch system bearing the flowers in Clivia is called an inflorescence (bloeiwyse). In Clivia the type of inflorescence is classified as an umbel (skerm). It consists of an elongated, leafless branch, called the scape (bloeisteel) (Fig. 1, sc.), which comes from one of the leaf axils and stretches up to the point where the flowers are borne, all more or less at the same level on an extremely condensed axis.

Each flower is attached to the inflorescence axis by means of a flower stalk, called the pedicel (blomsteel) (Fig. 1, pc). Then follows the ovary (vrugbeginsel) of the flower (Fig. 1, ov), situated below the perianth (periant) (Fig.1, per).

The perianth consists of three outer and three inner perianth members, called tepals (perigoonblare). Inside the perianth, are the six stamens (meeldrade), each consisting of an anther (helmknop), containing the pollen and a filament (helmdraad), which is the stalk of the anther.

The stigma (stempel) and style (styl), situated at the flower centre, are attached to the ovary and together the three parts form the pistil (stamper). The ovary in Clivia has three cavities or locules (vrughokke), each containing about eight to ten ovules (saadknoppe).

After pollination and fertilization, each fertilized ovule will form a seed, and the developing seeds will stimulate the ovary wall to grow and become the succulent part of the fruit (vrug) (Fig 1, fr).

The Clivia fruit is called a berry (besvrug of bessie), containing one to 15 seeds depending on how many of the ovules inside the ovary have been fertilised. Some of the fertilised ovules (now called young seeds) may also abort at an early stage, thus reducing the number of seeds per berry.

The membranous layer covering each seed is part of the inner layer of the fruit wall or endocarp. The fruit wall (derived from the ovary wall), consists of three layers, namely the outer, pigmented exocarp (eksokarp), the fleshy mesocarp (mesokarp) and the inner, membranous endocarp (endokarp). The suffix "carp" refers to fruit.

Please note that the Clivia fruit is not a pod or seed pod as so often seen in the literature. Pods are the fruit of peas, beans and other leguminous plants and the Clivia is surely not a legume.

The Clivia fruit is also not a seed, since the seeds are contained inside the fruit which is classified as a berry. In future, please use the names given in bold in the above paragraph. 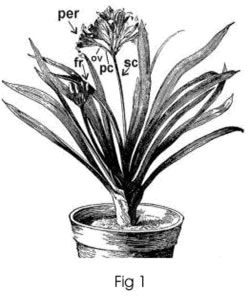