The genus was named in the honour of Charlotte Duchess of Northumberland whose maiden name was Clive, and whose garden at Syon House just across the river from Kew was famous at that time. This was the first Clivia that was discovered and named and as such this can really be considered to be the "type species" of the genus. In other words, the original description of the genus would have been identical to the description for the species. As more species were discovered, the generic description expanded to accommodate them so the description of Clivia nobilis remains the first and most essential concept of the genus.

C. nobilis is only found in the Eastern Cape Province, specifically from the Sundays River Mouth, extending up along the coast to the Mbashe River area, with colonies occurring as far inland as in the vicinity of Grahamstown, the Olifants Kop pass. The coastal areas have a mild climate (9-25°C) and receive 600-900 mm rainfall annually, and does not have the same threat of frost and snow. C. nobilis is found under evergreen forest, low bush (thicket) and amongst dune vegetation. The inland populations are found in wooded kloofs where they grow on riverbanks, rocky outcrops and along forest margins. The populations growing primary in coastal dune vegetation and sand are normally more exposed, with the plants near the top of dunes grow in full sunlight.

In dune are away from the sea, C. nobilis plants have long-leaves and large extended root systems, growing under high, closed canopy. Half-way up the dunes, the plants have short-leaves with smaller rooting systems, growing under a low 2-3 m canopy. The strap-shaped leaves are stiff , slightly rough to smooth with a rough edge, 300-800 mm long and 25-50 mm broad. A moderate to weak median stripe appear on the leaves that has an indented to very obtuse point.

The inflorescence consists of an umbel of 20-60 florets borne on a peduncle about 300 mm long The florets are pinkish yellow to dark red with green tips . They are pendulous tubular, about 11 mm wide and 25 - 40 mm long. The stamens slightly longer than the stamens and has an excellent self pollinating system. The berries are round to teardrop shaped and usually up to 6 seeds, covered in a distinctive purplish-red membrane. The berries take about turn red when they ripen after about 9 months. The seeds are much smaller than the other species with the radicle produced by the germinating seed is about 1.5 mm thick.

Information from the Clivia Society 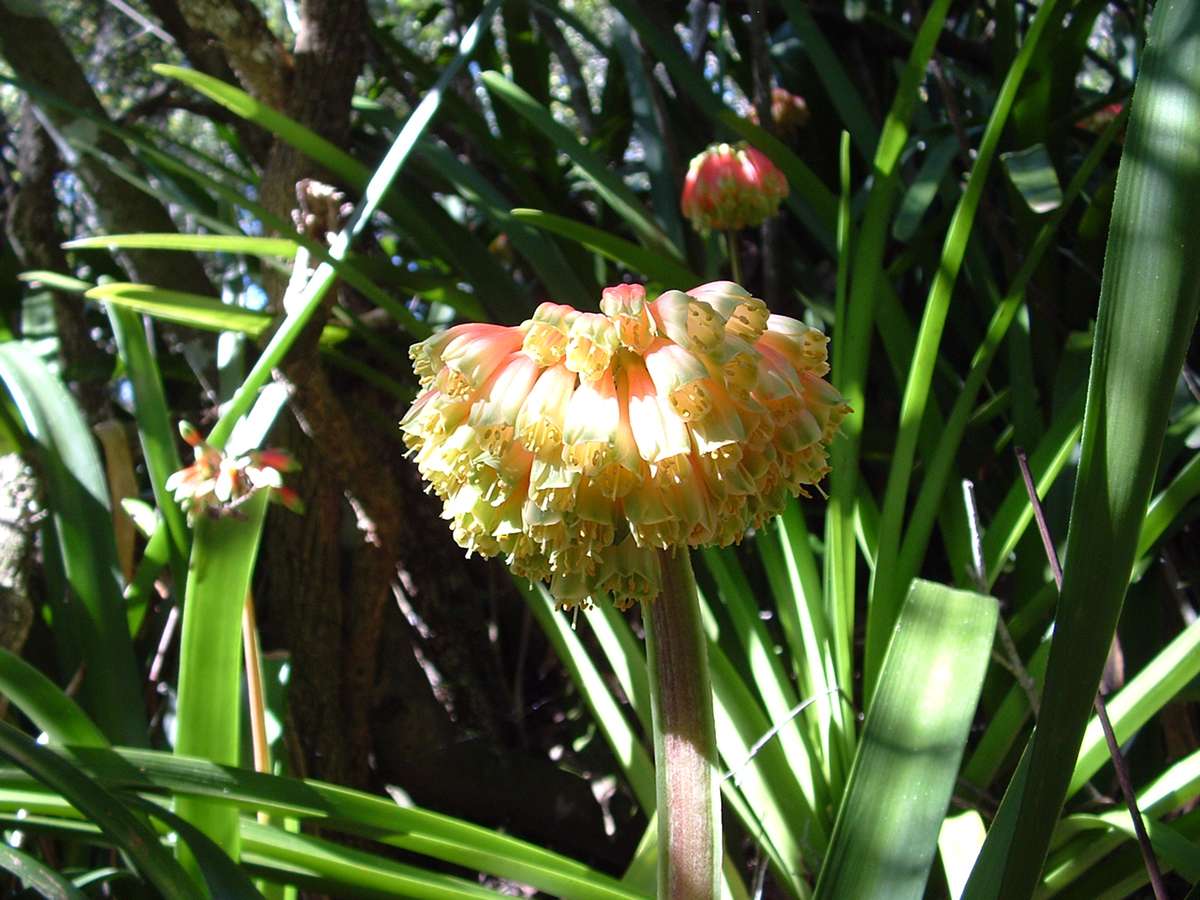 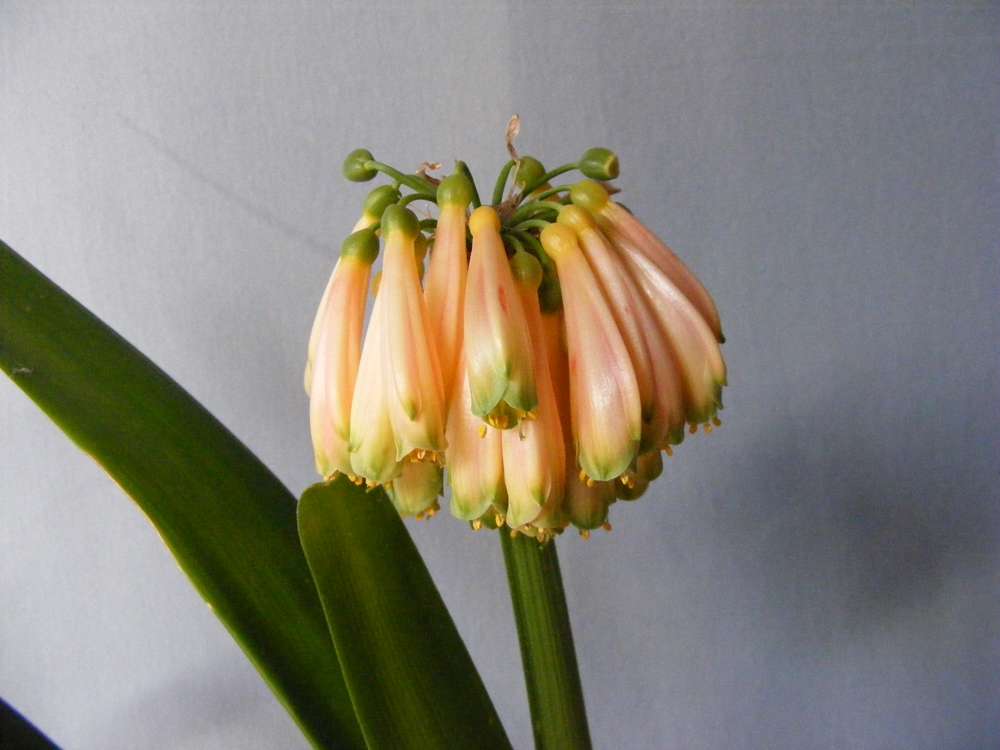 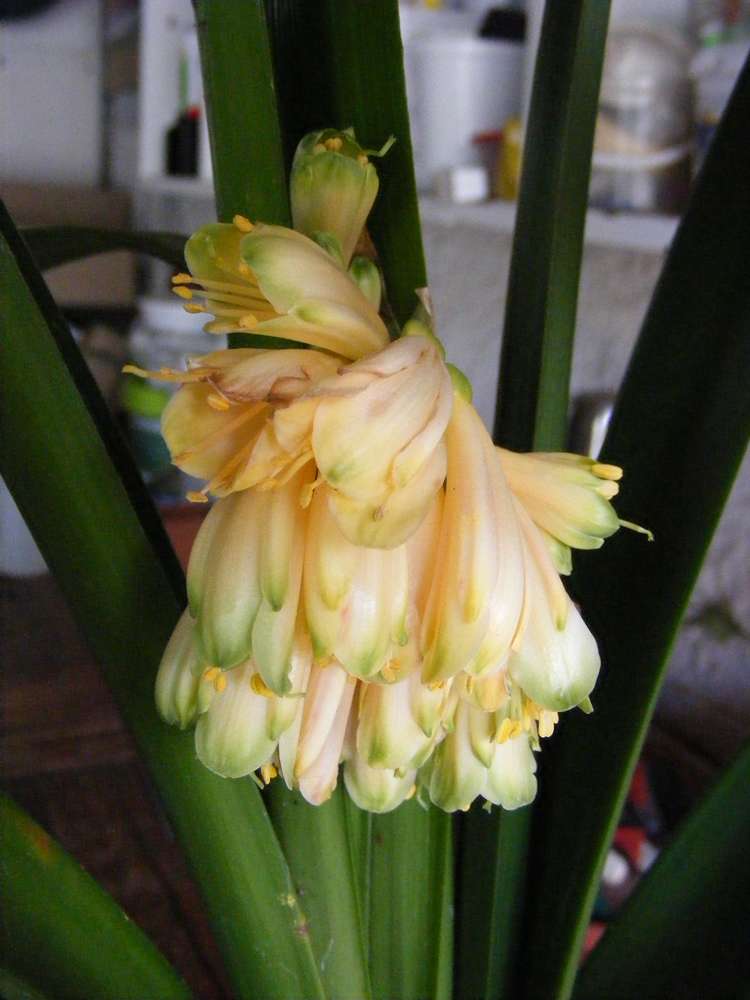